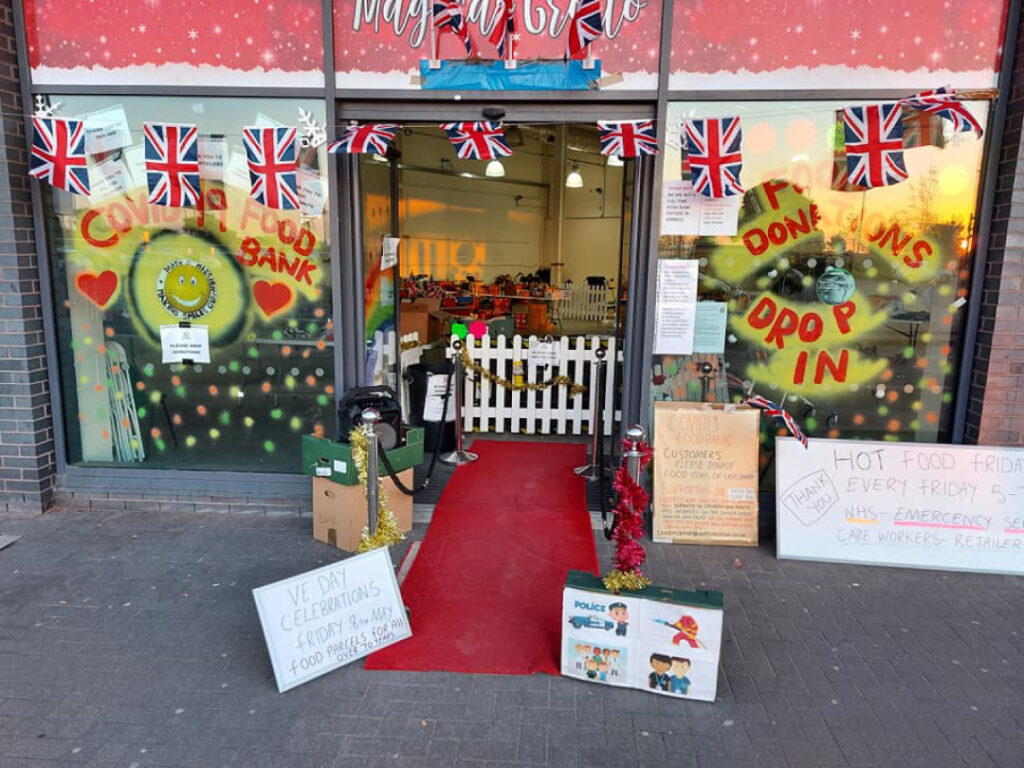 An emergency community food bank, set up at The Swan in the wake of the covid-19 pandemic, has provided over £46k of food and vital supplies to the people across the local community during its 12 week run from March to July 2020.

The brainchild of Matt Denning, the founder of the Matt’s Mission Children’s Charity, the foodbank achieved an incredible amount during its lifespan, with 2097 ‘Smile in a Box’ food parcels delivered, 4639 people supplied with a week’s worth of food and £34k food collected thanks to food donations from The Swan’s customers, who also gave to the charity for the purchase of additional food. £13,000 of funds were raise

d, including £8,000 from The Swan’s customers. Hot meals were delivered to pensioners, including an extra special VE Day parcel. The charity also showed its support for NHS and Care Workers, providing food and free hot drinks to those enduring long shifts.

The Covid-19 Community Foodbank was created as a partnership between Matt’s Mission, the Birmingham based children’s charity, and The Swan Shopping Centre in Yardley. The charity received a £1,500 grant from the Coronavirus Resilience Fund, awarded by the Heart of England Community Foundation in order to set up and run the foodbank.  Having recently been named as The Swan‘s Charity of the Year, the shopping centre provided an empty unit from which Matt’s Mission could operate the food bank, acting as a point for collections and sorting the donations made by shoppers. Tesco also provided its support, providing a collection point to promote the food bank and for people to leave their donations.

Run by over 30 volunteers, the foodbank closed its doors for the last time on 4 July, as the charity returned to its core work, supporting children with life threatening and life limiting illnesses and their families across Birmingham.

Barry Cartmell, Centre Manager at The Swan Shopping Centre, comments, “We’re overwhelmed by the generosity of our customers in supporting the foodbank and would like to thank Matt’s Mission for their amazing work in running it over the 12 weeks it has been at the centre. It’s given a lifeline to some of the most vulnerable members of our community and we hope it’s helped people get through some of the immense challenges of the past few months.”

Matt Denning, Director of Matt’s Mission Children’s Charity comments, “After setting up the food bank it did not take long for the word to get out about what we were doing and the community responded so well.  On the very first day a customer donated £100 donation and hundreds worth of food was donated each day over the 12 weeks of running the project. The food bank has supported thousands of vulnerable people, including seriously ill children and families of the Matt’s Mission charity.

I would like to place on record my appreciation to all the customers who supported, the companies who donated food to us, the volunteers who gave up their time to support, and to the Swan Shopping Centre for allowing us to hold the food bank at the centre.

The charity was able to support those with mental health issues, homeless charities, women’s refuges, Ronald McDonald House and Heartlands Hospital Children’s Ward amongst others.”